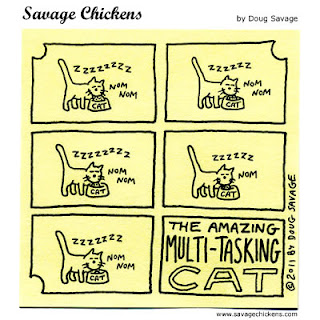 Made me smile; visit Doug Savage’s site here.
Posted by RGBisMe at 12:30 PM No comments:

Geoff Edwards, co-founder of DOJO, interviews one of the first ever African American creatives Roy Eaton. Eaton wrote the campaign line for Texaco: “You can trust your car to the man who wears the star,” Advertising Age named that Texaco jingle from 1962 as the foundation for one of the twentieth century’s top 100 creative campaigns.

Read the rest here, and visit his web site here.
Posted by RGBisMe at 8:08 AM No comments: 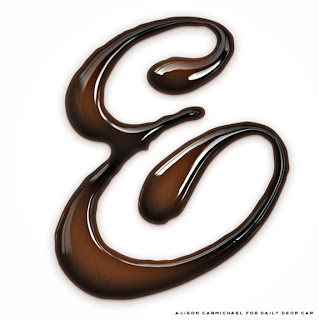 yecatching. . . .Alison Carmichael’s drop cap has the perfect amount of whimsey and playfulness—she works in a multitude of styles and mediums for her lettering, including ketchup and black treacle.

More daily drop caps can be found here.
Posted by RGBisMe at 5:00 AM No comments: 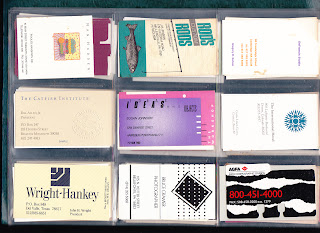 Clean, simple design, and colors for the DeFrancis Studio as well as The International Hotel cards. A nice embossing treatment on The Catfish Institute card. While at a graphic design studio in the late 80s and early 90s, Bruce Cramer shot photos for several publications we produced. He is still in the area and now part of KB Pictures. Wow, the torn paper look of the AGFA rolodex card is just confusing—why torn paper?
Posted by RGBisMe at 5:00 AM No comments:

Gandhi’s Words in His Own Type 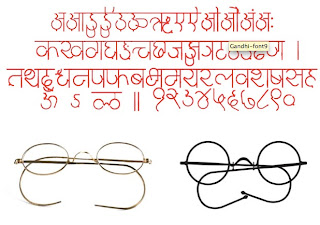 via @Issue Journal of Business & Design

“Leo Burnett India ad agency commemorated the 141st anniversary of Mahatma Gandhi’s birth (October 2, 2010) by creating an alphabetical font in the Devanagari script in the style of Gandhi’s trademark wireframe eyeglasses. The special typeface was the brainchild of Burnett’s national creative director KV ‘Pops’ Sridhar, who wanted to inspire younger generations with the teachings of Gandhi. The glasses symbolize Gandhi’s vision and his visionary thoughts on truth and nonviolence. Sridhar explains, ‘The way he saw the world is completely different than the way we do – and hence the glasses, to subtly nudge people into thinking like him again.’ Gandhi had originally given the glasses in the 1930s to an Indian army colonel who had asked the great leader for inspiration. Gandhi reportedly gave him his glasses and said, ‘These gave me the vision to free India.’ ”