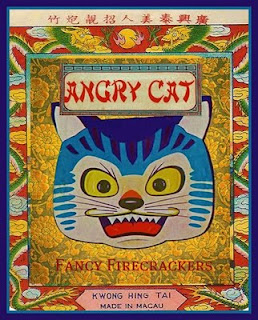 via letterology
See more examples of early firecracker labels here, with links to even more.
Posted by RGBisMe at 6:21 AM No comments:

Earworm of the Day: Sinnerman by Nina Simone

I first heard this song in The Thomas Crowne Affair; you can watch the clip from the movie that used the song here. A search turned up this link on Nina Simone’s life — she was was an American singer, songwriter, pianist, arranger, and civil rights activist widely associated with jazz music. Here is a link to her official website.

Sinnerman (spelled as one word) is one of Nina Simone’s most famous songs and she recorded her definitive 10-minute-plus version on her 1965 album Pastel Blues. Simone learned the lyrics of this song in her childhood when it was used at revival meetings by her mother, a Methodist minister, to help people confess their sins. In the early days of her career during the early sixties, when she was heavily involved in the Greenwich Village scene, Simone often used the long piece to end her live performances.  Listen to her 10-minute version here.

Find the lyrics to Sinnerman here, and more about the song’s history here.
Posted by RGBisMe at 5:01 AM No comments:

Email ThisBlogThis!Share to TwitterShare to FacebookShare to Pinterest
Labels: earworm of the day, Nina Simone, sinnerman

via mehallo blog
“Before there were photocopiers, scanners and printers, there was the Ditto Machine (a.k.a. spirit duplicator), produced by the Illinois-based Ditto Corporation; originally introduced in 1923…”
Read the rest here. A link for a pretty cool t-shirt can be found there as well.

via shady characters
“Although the ampersand’s creator (if it can be said to have one at all) is not recorded, there exists a popular misconception that the symbol’s name is taken from ‘Amper’s and’, after a supposed originator. Mentions of this derivation come from sources as diverse as an 1883 book on Personal and Family Names written by one H. A. Long, and more recently the collaborative, internet-based Urban Dictionary which suggests that the symbol was both invented by and named for a 17th century typesetter called Manfred Johann Amper. Unfortunately, both claims are undermined by a lack of corroborating evidence, and even more telling, ‘Manfred Johann Amper’ appears to never have existed.

The real origin of the word ‘ampersand’ likely owes more to Latin than to French, although it is a far more recent creation than the character which bears its name. During the 19th century, the ampersand was routinely taught as the twenty-seventh letter of the alphabet, and in common with those other letters which formed words by themselves — ‘A’ and ‘I’, for example — it was prefixed by the Latin per se, or ‘by itself’. Schoolchildren would recite “X, Y, Z, and per se and”, while particularly bored pupils would not so much recite as slur the final syllables to yield any one of a dazzling variety of words. This entry from Farmer & Henley’s 1905 Dictionary of Slang and Colloquial Engish recorded some of them for posterity:

Image of the Day: Life is a Bowl of Perry's 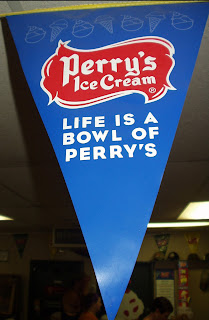 It’s always fun when we drive into the regions that serve Perry’s ice cream!
More on the company can be found here.
Posted by RGBisMe at 4:00 AM No comments: