This afternoon we decided to get out of the house for a bit, and go see if we could find the Moon sycamore tree in Hollidaysburg. It was sunny outside, but very windy when we located Highland Hall. 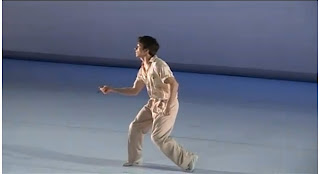 
“The American Ballet Theatre and U.S. Embassy London invited students from across London to watch them rehearse for their UK performances. Afterwards some of the students got to participate in a question and answer session with members of the production.”


Watch it here. Screen capture of my son, Arron Scott, in Tico Tico from Paul Taylor’s Company B.

Posted by RGBisMe at 4:59 AM No comments:

The Mystery of the Missing Moon Trees

“15 years after NASA astronomer David Williams started searching for them, hundreds of trees grown from space-faring seeds are still missing. The moon trees, whose seeds circled the moon 34 times in Apollo 14 astronaut Stuart Roosa’s pocket, were welcomed back to Earth with great fanfare in 1971. One was planted in Washington Square in Philadelphia as part of the 1975 bicentennial celebrations. Another took root at the White House. Several found homes at state capitals and space-related sites around the country. Then-president Gerald Ford called the trees ‘living symbol[s] of our spectacular human and scientific achievements.’ And then, mysteriously, everyone seemed to forget about them.”

Read the rest here, visit his site here. Fascinating; a moon tree is less than an hour away in Hollidaysburg, PA.

Posted by RGBisMe at 4:35 AM No comments:

What is the Financial Times and Why is it Pink?

via the financial times

The Financial Times is an international business newspaper. It is a morning daily newspaper published in London and printed in 23 cities around the world. Its primary rival is New York City-based The Wall Street Journal. Since 1893, the Financial Times has used its distinctive salmon-pink newsprint as a distinguishing trademark to set itself apart from other daily news publications.
Posted by RGBisMe at 3:00 AM No comments: