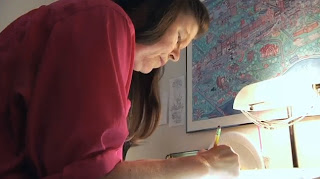 via the daily heller
“Lonni Sue Johnson, whose illustrations have appeared in The New Yorker and The New York Times, among scores of books and magazines, was stricken with viral encephalitis in 2007. The disease left her with severe, memory-impairing brain damage — amnesia.  Johns Hopkins University has been engaged in a research study into the ‘artistic aspect’ of her illness. An announcement and video of her cognitive struggle was just released by Johns Hopkins and an exhibit of Johnson’s post-illness work, ‘Puzzles of the Brain: An Artist’s Journey through Amnesia,’ will open on September 17 at The Walters Museum in Baltimore…”
Read the rest here; with lots of great links to follow.

Scoutmob is giving away a PUBLIC C7 or V7 bike every Friday in September.
Enter the giveaway here.

Posted by RGBisMe at 4:59 AM No comments: