via the fontfeed
“Long before the invention of printing, hand painted letter boards were widespread as teaching material in schools. ABC tablets made of wood were already mentioned in an English manuscript as early as the 14th century. Later a thin, transparent horn plate was used to protect the paper glued on the board against wear and dirt. This is why up to this day letter boards are still called horn books in English-speaking regions, even though they are not books in the conventional sense of the word…”
Read the rest here, and learn a bit more about horn books here and here.

Posted by RGBisMe at 7:03 AM No comments: 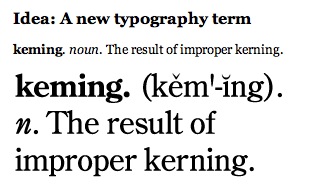 via the daily heller
“Computer Revolution Trivia Dept.: IBM introduced the ThinkPad line of laptop computers in 1992. Back in the 1920s Thomas J. Watson, Sr, introduced ‘THINK’ as an IBM slogan. For decades IBM distributed small notepads with the word ‘THINK’ etched onto a brown leatherette cover to customers and employees. The name ThinkPad was suggested by IBM employee Denny Wainwright, who is reported to have had a ‘THINK’ notepad in his pocket…”
Read the rest here.