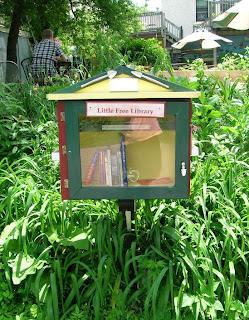 via utne reader
“Andrew Carnegie built an impressive 2,509 libraries around the turn of the 20th century. Now Rick Brooks and Todd Bol are on a mission to top his total with their two-foot by two-foot Little Free Libraries, reports Michael Kelley in Library Journal. The diminutive, birdhouse-like libraries, which Brooks and Bol began installing in Hudson and Madison, Wisconsin, in 2009, are typically made of wood and Plexiglas and are designed to hold about 20 books for community members to borrow and enjoy. Offerings include anything from Russian novels and gardening guides to French cookbooks and Dr. Seuss. Each Little Free Library runs on the honor system, displaying a sign that asks patrons to Take a Book, Leave a Book. Fifty libraries have been built so far, with 30 more underway and plans to expand into Chicago, Long Island, and elsewhere…”
Read the rest here, visit Little Free Library here.
Posted by RGBisMe at 5:00 AM No comments: