Wood Type of the Month: Balloon

Posted by RGBisMe at 7:01 AM No comments:

Email ThisBlogThis!Share to TwitterShare to FacebookShare to Pinterest
Labels: Wood Type of the Month 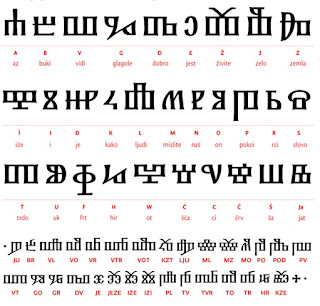 via typonine
“The Glagolitic script didn’t evolve from any older orthographic system, it was created as a completely new and original script. At first the Glagolitic script was rounded in shape and in that form came to Croatian ground in 9th century. From 12th century Glagolic script exists only in Croatian area and it evolves to a new angular style which is called Croatian Glagolitic.
The basic shapes of Croatian Glagolitic are determined by a few basic strokes mostly horizontal and vertical. The architecture of characters is very symmetrical which enabled the creation of numerous two-, three-, even four letter ligatures. Croatian Glagolitic is consisted of 32 alphanumeric characters. The script got its name in the 19th century from a verb glagoljati — to talk. This script was used in holy books, poems, legends, novels and legal documents…”
Read the rest here. The Typonine Glagolitic font is free for download.
Posted by RGBisMe at 5:00 AM No comments:

via swissmiss
“Avery Oldfield created Llamafont.com, a site that allows you to type a message in a font made of llamas and share it with your friends. Why? Because llamas make everything better...”
Makes me smile.
Posted by RGBisMe at 5:00 AM 1 comment: 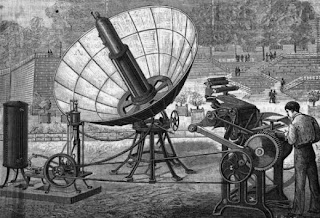 via retronaut
‘Eventually industry will no longer find in Europe the resources to satisfy its prodigious expansion. Coal will undoubtedly be used up. What will industry do then?’
— Augustin Bernard Mouchot (1825-1912), French inventor of the earliest solar-powered engine, converting solar energy into mechanical steam power
I love that the industry used in the image is a letterpress, which looks very much like the one we have at work.
Posted by RGBisMe at 4:00 AM No comments: