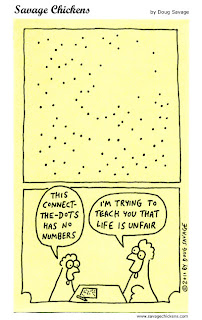 via savage chickens
This just makes me smile!
Posted by RGBisMe at 7:40 AM No comments: 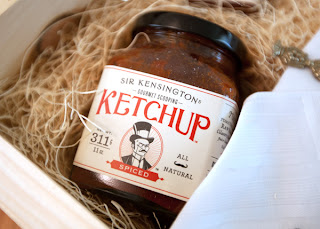 via notcot
“Some things were thought to be unachievable. Gourmet spiced ketchup may now be crossed off such lists…”
Be sure to go to the notcot site here to read about the beginning of their introduction to Sir Kensington’s, and visit the playful Sir Kensington’s site itself here.
Posted by RGBisMe at 6:38 AM No comments:

How Pittsburgh lost its ‘H’ and then got it back


via nor and the post gazette
“Richardson Clover had a problem, and a pretty good idea how to fix it. As assistant hydrographer in the U.S. Navy’s Bureau of Navigation in 1889, Lt. Clover was in charge of producing its maps. He’d noticed that many place names were spelled several different ways, especially in Alaska, where there were 20 indigenous languages. He suggested to Thomas C. Mendenhall, superintendent of the U.S. Coast and Geodetic Survey, that the two offices work together on standardizing place names on government charts and other official publications. Thus was born, in 1890, the U.S. Board on Geographic Names. One of its first acts, on June 2, 1891, was to take away Pittsburgh’s “H.” On Dec. 23, President Benjamin Harrison made it official. Merry Christmas, Pittsburg! Nothing personal, mind you. The board ruled that all cities and towns with name endings pronounced ‘berg’ should be spelled ‘burg.’... ”
Read the rest here.
Posted by RGBisMe at 6:13 AM No comments:

Inside Out: A Global Arts Project

via photojojo
“The Banksy of the photo world wants you to be in his next project! 2011′s TED Prize winner JR is known for combating social inequalities with photography. He’s plastered massive 20 foot tall portraits from Paris to Brazil, Nairobi, and Cambodia. Inside Out is a photo project that asks anyone to upload their portrait with their personal story. After uploading, your photo’s then mailed to you as a poster that you can post in public. The goal? To give individuals a voice and unveil the untold stories of people around the world. Awareness and mutual respect are the aim!”
Visit the Photojojo site here, and the Inside Out site here.
Posted by RGBisMe at 5:00 AM No comments:

Email ThisBlogThis!Share to TwitterShare to FacebookShare to Pinterest
Labels: Inside Out, JR, photography, portraits, posters, ted 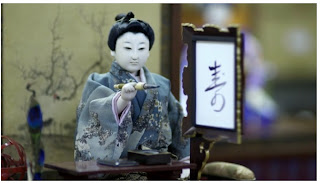 via make
“Japan has always been on the forefront of cutting edge robotics. Its roots can be traced back 200-300 years during the Edo period when skilled craftsmen created automata (self-operating machines). Using nothing more than pulleys and weights they were able to make the Karakuri (Japanese automata) perform amazing tasks. Today Hideki Higashino is one of the few remaining craftsmen who is determined to keep the history and tradition of Japanese Karakuri alive…”
Watch the video here.
Posted by RGBisMe at 5:00 AM No comments: 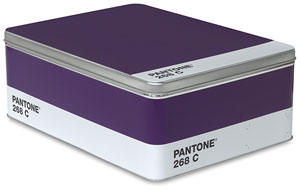 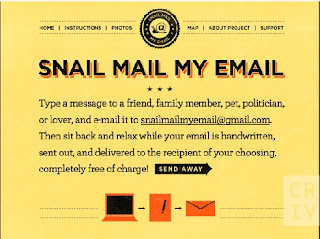 via creativity
Fall back in love with letters. Ivan Cash created Snail Mail My Email, a a month-long art project aimed at inspiring people to rediscover the lost art of letter writing. You simply go to the site and send in an email of up to 200 words, which you can customize with one item (for example, a doodle, petal, lipstick kiss or your own graphic). The service will then transform your email into a handwritten letter physically mailed to your recipient, free of charge. The letters written will be showcased on the site, which is live until August 15th.”
Find out more here.
Posted by RGBisMe at 4:14 AM No comments: