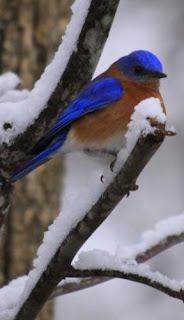 On our travels today, we saw at least two male bluebirds. Pretty exciting that we saw some of the earliest arrivals of the annual spring pilgrimage to the Northeast.
Posted by RGBisMe at 5:36 PM No comments:

Email ThisBlogThis!Share to TwitterShare to FacebookShare to Pinterest
Labels: bluebirds 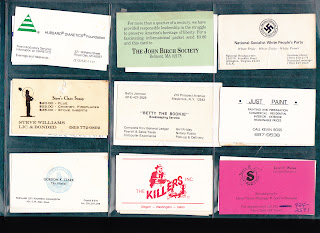 The top row of cards: Dianetics, the John Birch Society, and the National Socialist White People’s Party. I’m not entirely sure where I acquired the first two radical cult cards, but the third I remember vividly.

It was an early morning in 1979, probably around 7:15 a.m. I was walking across the newly completed Dorcas Street bridge in Lewistown on my way to high school. Lightly masking taped to the bridge was this card. I stopped in my tracks and looked around me. It felt like I was being watched as a removed the card. I quickly tucked the card in my pocket and continued to school, still feeling that I was being watched all day long.

Though not specifically listed on The Southern Poverty Law Center’s site, Mifflin and her neighboring counties have their share of hate groups.

Center card: “Bettie the Bookie”—Would anyone really go to have their legitimate bookkeeping done by someone who refers to themselves as a bookie? I like that it lists among her skills, Girl Friday. There is a term you do not hear anymore. Below her card, is “The Killers Inc” which I assume is an extermination service. The guy with the gun seems just a little too happy.

Click on the image for a larger view of the cards.
Posted by RGBisMe at 9:04 AM No comments:

Image of the Day: Rabbit Statue 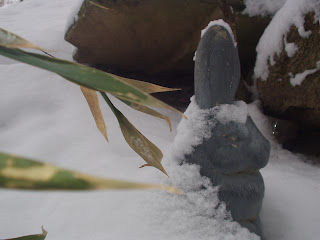 Posted by RGBisMe at 8:23 AM No comments: