Tekhelet, Snails, and the Midnight Sky 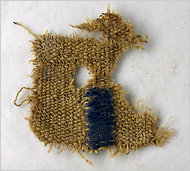 “One of the mysteries that scholars have puzzled over for centuries is the exact shade of blue represented by ‘tekhelet,’ which the Bible mentions as the color of ceremonial robes donned by high priests and ritual prayer tassels worn by the common Israelite.

Though scientists and scholars are still debating the exact shade of the ritual blue, the dye used is modeled after a 2,000-year-old textile, above, and is produced from sea snails found in Israeli waters.

What was known about tekhelet (pronounced t-CHELL-et) was that the Talmud said it was produced from the secretion of the sea snail, which is still found on Israeli beaches. Traditional interpretations have characterized tekhelet as a pure blue, symbolic of the heavens so that Jews would remember God. Not so, according to an Israeli scholar who has a new analysis: tekhelet appears to have been closer to a bluish purple.

The scholar, Zvi C. Koren, a professor specializing in the analytical chemistry of ancient colorants, says he has identified the first known physical sample of tekhelet in a tiny, 2,000-year-old patch of dyed fabric recovered from Masada, King Herod’s Judean Desert fortress, later the site of a mass suicide by Jewish zealots after a long standoff against the Romans.

‘It really is majestic,’ Dr. Koren said of the shade, which he said remained close to its original hue and appeared to be indigo. . . ” 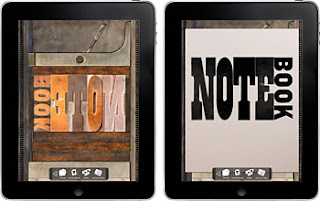 “LetterMPress is a virtual letterpress app for the iPad—at least that’s the idea. The project is using Kickstarter to raise funds to complete the app and to acquire wood type fonts to include (virtually) in the app.

... Not only will you be able to make compositions on a virtual press bed with virtual wood type, mix and apply virtual ink, and make virtual prints, if all goes according to plan, you will be able to send them your design and have it all done for real, with real wood type, ink, and paper.”

Learn more about the project here.

Posted by RGBisMe at 5:02 AM No comments:

Earworm: All the Gold in California 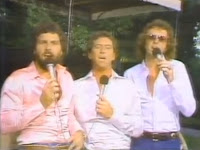 I remember hearing this song by Larry Gatlin & The Gatlin Brothers Band in 1979 on local radio stations WKVA and WMRF. Though not typically a fan of country songs, the vocal harmonies have always stuck with me.


Listen to it here.
Posted by RGBisMe at 3:00 AM No comments:

Email ThisBlogThis!Share to TwitterShare to FacebookShare to Pinterest
Labels: All the Gold in California, earworm of the day, music, The Gatlin Brothers
Newer Posts Older Posts Home
Subscribe to: Posts (Atom)