spotted on the edible raven blog
“Ravens have long been held in high esteem by brewers, particularly in the British Isles. A famous London brewery once had a tame ‘mascot’ raven named ‘Joey’ that was thought to bring the brewery good luck. Many years ago while home brewing, our brewer/owner came across an old photo in an online stock photo database entitled ‘Brewer with tame raven.’ That photo was the inspiration for continuing the mystical brewery–raven connection, hence the Black Raven Brewing Company.”

More about their story here.

Keep Calm and Carry On

In light of the recent announcement by Pennsylvania Gov. Tom Corbett’s proposed budget for 2011-2012 that would cut annual state funding for Penn State roughly in half, and President Graham Spanier’s response, I was inspired to update the classic British poster from WWII.


In my opinion, the best thing I can do is ignore the swirling and escalating rumors, do my job, step up to the plate when necessary, and just keep focused on the task at hand. I do not get a lot of foot traffic in my office, but perhaps anyone who sees my desktop [for now] will be influenced.


From wikipedia: “Keep Calm and Carry On was a poster produced by the British government in 1939 during the beginning of World War II, intended to raise the morale of the British public under the threat of impending invasion. It was little known and never used. The poster was rediscovered in 2000 and has been re-issued by a number of private sector companies, and used as the decorative theme for a range of other products. There are only two known surviving examples of the poster outside of government archives.

The poster was initially produced by the Ministry of Information in 1939 during the beginning of World War II. It was intended to be distributed in order to strengthen morale in the event of a wartime disaster. Two-and-a-half million copies were printed, although the poster was distributed only in limited numbers. The designer of the poster is not known.” 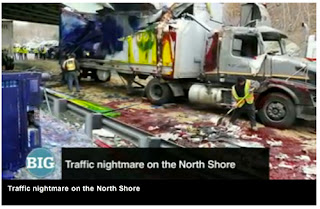 “Approximately 16,000 pounds of ink cartridges from the Flint Group, an Indianapolis-based company selling printing and packaging products, was bound for a newspaper company in Portland, Maine. Red, blue, and yellow ink cartridges were inside the truck, but Ferson said there is no evidence the yellow ink was released.

Go to the story here.