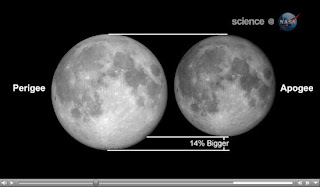 pointed out by my father-in-law, via nasa

“On March 19th, a full Moon of rare size and beauty will rise in the east at sunset. It’s a super ‘perigee moon’—the biggest in almost 20 years. ‘The last full Moon so big and close to Earth occurred in March of 1993,’ says Geoff Chester of the US Naval Observatory in Washington DC. ‘I’d say it’s worth a look.’

Full Moons vary in size because of the oval shape of the Moon’s orbit. It is an ellipse with one side (perigee) about 50,000 km closer to Earth than the other (apogee): diagram. Nearby perigee moons are about 14% bigger and 30% brighter than lesser moons that occur on the apogee side of the Moon’s orbit.

‘The full Moon of March 19th occurs less than one hour away from perigee—a near-perfect coincidence that happens only 18 years or so,’ adds Chester. A perigee full Moon brings with it extra-high ‘perigean tides,’ but this is nothing to worry about, according to NOAA. In most places, lunar gravity at perigee pulls tide waters only a few centimeters (an inch or so) higher than usual. Local geography can amplify the effect to about 15 centimeters (six inches)—not exactly a great flood.

Indeed, contrary to some reports circulating the Internet, perigee Moons do not trigger natural disasters. The ‘super moon’ of March 1983, for instance, passed without incident. And an almost-super Moon in Dec. 2008 also proved harmless.”

Posted by RGBisMe at 6:00 AM No comments: 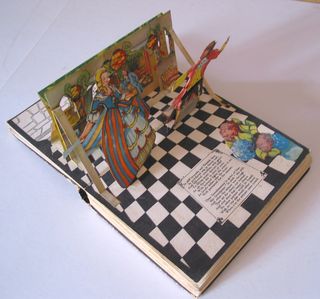 “The Allegro Movable Book Collection is Australia’s largest and most comprehensive collection of movable and pop-up books covering over 300 years of published history. Corrie Allegro is releasing books from this collection to the public, collectors and institutions. This book site contains articles, news and related links to the genre of ‘movable’ books.” 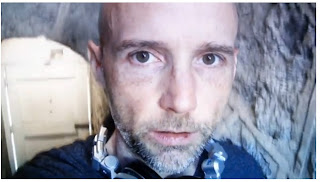 “On his upcoming effort Destroyed, Moby constructs synthetic symphonies out of sounds coaxed from broken-down gear during dead-of-night sessions in hotel rooms. It’s an insomniac artist’s way of making sense of the world during a time when the music industry, and everything else, seems to be falling into chaos. . . .

Wired.com: You serve on the board of directors of the Institute for Music and Neurologic Function, which works with Musicophilia: Tales of Music and the Brain author, neurologist Oliver Sacks. What would Sacks think if he heard Destroyed?

Moby: Oliver is an interesting guy, who I hold in the highest regard. But he can be a little cranky. He mainly likes classical music, so my honest answer is I think it depends on if you caught him on a good or bad day or time. If you caught him at a time where he was really relaxed and open-minded, he might take the time to listen to Destroyed’s classical and melodic influences. But I have a feeling Concetta Tomaino, the IMNF’s executive director, might be favorably disposed to it. . . .” 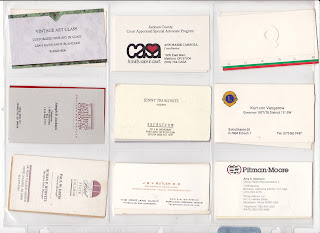 [Middle Row] Anthros Medical Group card. The type treatment for the logo that has been stretched, spaced, and squished, just makes me cringe. Joe Jackson used to come into to do desktop publishing on one of the Mac Pluses that could be rented by the hour at Graphics 101. He had a gentle positive personality and wore loud colorful jam pants -- the style my son wore in elementary school.

[Bottom Row] Hotel State College; still quite a presence in State College. The Pitman-Moore card—Ethical Sales Representative II? What a job title! A seach online shows that the company ‘produces pharmaceutical and biological products for animals.”
Posted by RGBisMe at 5:00 AM No comments: