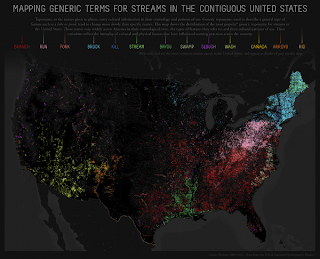 “A body of running water may be called any of many different names, the most generic being stream, the most common being river.  A river can be defined as ‘a natural stream of water of usually considerable volume’. General terms for smaller streams include creek (smaller than a river) and brook (smaller than a creek). Very specific types of water currents  include anabranches (river branches that rejoin the main body of water) and distributaries (branches that don’t).

This map charts the rich variety of waterflow toponyms in the US, which reflects the climatological and geographical diversity of the country, but also its linguistic and historical heritage. River names seem extremely resistant to change, and indeed often are echoes of earlier dominant cultures.

The colors on the map, which is based on the place names in the USGS National Hydrography Dataset, correspond to the generic toponyms for waterflows, excluding the two commonest ones (river and creek, rendered in gray).

The term brook (light blue) is massively prevalent throughout New England, and into northern New Jersey and Pennsylvania. It is interspersed with stream (light green) in Maine, the only place in the country where that term is used with any frequency; and with kill (dark blue) in New York state’s Hudson valley - the occurrence of that Dutch-derived term coinciding somewhat with the former Dutch colony of New Netherland. Pennsylvania, Maryland, northern Virginia, West Virginia and Ohio are dominated by the run (pink)…”