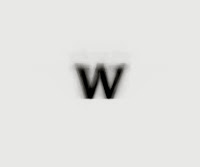 via a raven
Moritz Resl writes, “This project shows what a font would look like if it consisted of all typefaces installed on my system. Every character from a to z is drawn using every single font with a low opacity. In total there are over 900 typefaces in my library. I didn’t exclude the ugly ones…”
I just check my font library at work — I have 4,702 fonts; yikes! See his results of the 900 here.

Posted by RGBisMe at 5:02 PM No comments:

Image of the Day: No Cheese Puffs Were Ejected 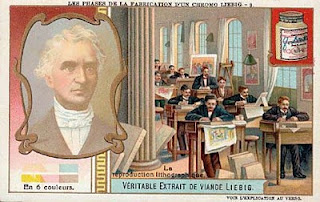 via letterology
“The process of Chromolithography was invented in the late 1790s, 40 years before the invention of photography, and it was an alterative to the woodcut or engraving process where you carve into the surface in order to create a relief image. Chromoliths, (sometimes referred to as chromos), are known as planographic prints, meaning the images and text were drawn on a flat, limestone surface with a greasy crayon and when it chemically treated, the drawn areas would attract ink and the stone would repel it. Each color represented a different stone, so the task of producing this method of lithography was not only extremely labor intensive, but an art that few mastered. The subtle texture of each print comes from the irregular grain of the stone. Some of the finest printers were in Germany and France where much of the best quality limestone was mined…”
The set of 6 cards found here illustrate the entire chromolithography printing process in consecutive order.