via The Bennington Vale Evening Transcript 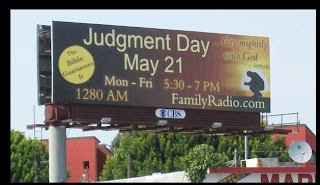 “By now, everyone in Bennington Vale has seen the signs promising the end of days on May 21, 2011. The prophecy is being spread by Family Stations, a 53-year-old Christian radio network with over 60 outlets. Family Stations is so convinced that God is ready to receive His devoted flock this year that they have posted over 3,200 billboards worldwide with the message: ‘The Bible guarantees it!’ According to their prediction, the world will be progressively shaken apart by earthquakes, beginning at 6:00 p.m. EDT on May 21 and continuing through October 21. During this period of cataclysm, the Rapture will call all true believers back to Heaven. As a result, and with heavy heart, The Bennington Vale Evening Transcript is issuing final paychecks to some staff members and preparing to temporarily cease publication at the end of next week -- which is also the end of the world…”
Read the rest here. 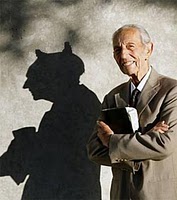 via wikipedia
“Harold Egbert Camping has gained recent notoriety due to his prediction that the Christian Rapture will take place on May 21, 2011 and that the end of the world will take place five months later on October 21, 2011. Followers of Camping claim that around 200 million people (approximately 3% of the world's population) will be raptured. As for the remainder of the human population, Camping himself believes in annihilationism, which is the view that those who are not saved will simply cease to be conscious rather than spend eternity in Hell. Those who were "unsaved" and died prior to May 21 will not be affected by or experience the Rapture or the end of the world…”
Read the rest here.Or you can slog through his site here to learn more behind his prediction, or here and here or more links.

Posted by RGBisMe at 9:29 PM No comments:

Email ThisBlogThis!Share to TwitterShare to FacebookShare to Pinterest
Labels: Harold Egbert Camping, may 21, october 21, the rapture 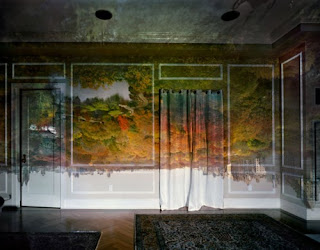 via neatorama
Cuban-born photographer Abelardo Morell demonstrated the concept of camera obscura to college students in 1988 by turning the entire classroom into a camera.
Read the rest here.

Creating a community of happiness 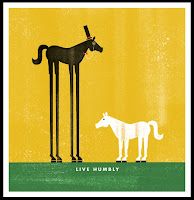 via felt and wire
“Eric Smith’s Live Now project began as a website collection of inspirational quotes illustrated by designers. It quickly turned into an international community project, which has now been released in book format. The Live Now book includes the contributed works of 65 designers and illustrators from around the world. Of the message that he hopes Live Now will inspire…”
Read the rest here, visit the Live Now community here.