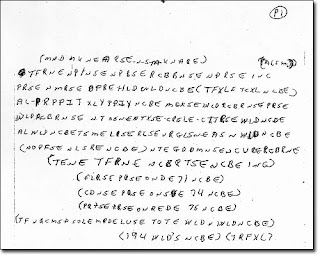 via Federal Bureau of Investigation

“On June 30, 1999, sheriff’s officers in St. Louis, Missouri discovered the body of 41-year-old Ricky McCormick. He had been murdered and dumped in a field. The only clues regarding the homicide were two encrypted notes found in the victim’s pants pockets.  Despite extensive work by our Cryptanalysis and Racketeering Records Unit (CRRU), as well as help from the American Cryptogram Association, the meanings of those two coded notes remain a mystery to this day, and Ricky McCormick’s murderer has yet to face justice. “We are really good at what we do,” said CRRU chief Dan Olson, “but we could use some help with this one.” In fact, Ricky McCormick’s encrypted notes are one of CRRU’s top unsolved cases. “Breaking the code,” said Olson, “could reveal the victim’s whereabouts before his death and could lead to the solution of a homicide. Not every cipher we get arrives at our door under those circumstances.”

Read the rest, and see the other note here. More on the story from the NYTimes here, and a follow-up on potential leads here.

“Happy Holi! Imprint blows you a floating dust-choked kiss as the Hindu Festival of Colors draws to a close. . . ”

Posted by RGBisMe at 8:32 PM No comments:

Make a Custom Brush for your Watermark

via thephotoletariat
“Like many necessary tasks, uploading your photos to your blog can be tedious: after a while, all that resizing, tagging, and watermarking gets old. But there are lots of ways to make this process more efficient, and one of my favorites involves making your watermark a custom brush. Custom brushes give you more flexibility (color, size, placement, etc.), and you can watermark your images in a fraction of a second.”

Posted by RGBisMe at 6:26 AM No comments:

via colourlovers
“The work of Daniera ter Haar & Christoph Brach, who have become better known by the name of one of their projects, Raw Color, is highly prismatic, covering the spectrum between art, design, photography and color research by mixing the powerful colors of vegetables, innovative color harvesting processes, with unique applications for print and textiles. The Eindhoven, Netherlands based team uses color as the connection between their different practices posing questions like ‘what is the nature of a color and what is the connection to its physical state.’”
Read and see more of this work here.
Posted by RGBisMe at 6:21 AM No comments: 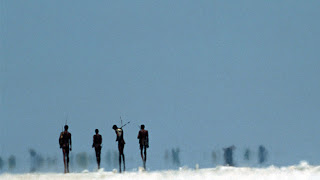