Image of the Day: Nestle® For Men 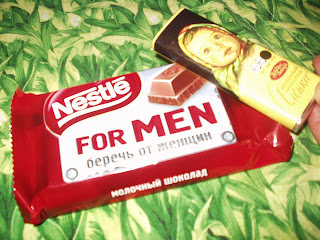 While recently touring in Russia, my son picked up these two chocolate bars — a dazed baby and the Nestle For Men bars. My wife and I tried both milk chocolate bars, but the name ”For Men” really is crazy; why only for men, does it have testosterone as an ingredient . . .?
After a brief search online, I found this translated write-up about the campaign: “...The idea of this product creation, intended only for men, is based on deep understanding of a modern man psychology. ‘The role of woman in a society is more and more increasing. A distinction between a woman and a man is gradually drawn. So much the men would like to have things, which will belong only to them. Considering this need, Nestle company developed a key idea of ‘untouchable man’s property,’ which was laid in the basis of Nestle Classic for Men strategic concept,’ Aleksandra Tarasinkevich, senior manager of trademarks of confectionery products department of Nestle company says... No tears, no sentiments... Men are not such as women, therefore they like everything big, weighty, and brutal that will not be lost [in the] palm [of their hand].”

Thank goodness this sexist campaign, with its poor attempt at humor, wouldn’t be shown in the United States. But this is a very much appreciated eye-opening world culture lesson in marketing in Russia!
Posted by RGBisMe at 5:00 AM No comments:

The Royal Family Name, the House of Windsor, and Mountbatten-Windsor

Read the rest here, and a bit more here. DaBraLady had the answer again!
Posted by RGBisMe at 4:01 AM No comments: 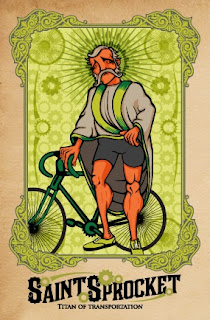 via liquid treat
“Grist has been a proud provider of environmental news and commentary with a wry twist since 1999, and so the Seattle-based nonprofit greets each Earth Day with some eye rolling. This year, the organization is calling out the nonsense with Earth Confessions. The new site offers the opportunity to confess your sins against the Earth and swear off your evil ways forever. Those not comfortable airing their dirty laundry in public can peruse the Sin Gallery…”

Visit the site here, and view the prayer cards here. 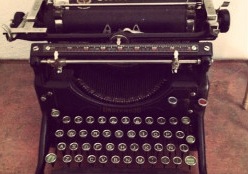 “As ubiquitous as iPads may be, the typewriter is ‘far from dead,’ says Ed Michael, General Manager of Sales at Moonachie, NJ-based Swintec… ”

Read the rest here.
Posted by RGBisMe at 4:00 AM No comments: