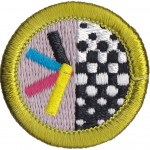 via The International Printing Museum
Makes me smile 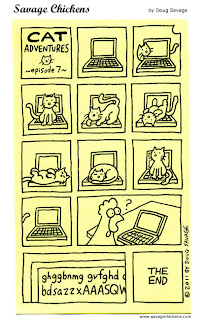 via savage chickens
Makes me smile

via imprint
“For decades the School of Visual Arts in New York City has been famous for the unstinting excellence of its promotional efforts. The most visible of these works have been subway posters notable for their blend of memorable copywriting and arresting imagery. The latest example is an eye-catching simulation of the mosaics that are virtually synonymous with the subway and thus with the city itself. The poster is the work of Louise Fili Ltd. Louise Fili not only designed it but also wrote its copy.

Fili chose to base the letters of the poster on those of the oldest portion of the subway system, the IRT (Interborough Rapid Transit) lines. Although IRT stations—which date as far back as 1904—have mosaic sans serif as well as serif letters she felt that the seriffed capitals were “much more classical and elegant, especially in light of how much copy there was.” To the non-New Yorker, they are definitely more recognizable as the letters of the subway. But they are also more complicated to replicate…”
Read the rest here. 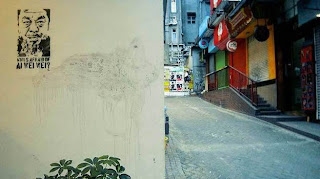 via npr
“Hong Kong police are investigating criminal damage charges against artist Tangerine for graffiti of detained Chinese artist Ai Weiwei, which could carry a maximum sentence of 10 years in jail.”
Read, and listen, to the rest here. More on guerilla art can be found here.
Posted by RGBisMe at 3:00 AM No comments: via imprint
“Did you know the United States has an official color palette? True story. It does. There’s a swatch system representing every irritating, boring color you see in official capacity, from the brown of a rest area to the green of a street sign to the brown of the military uniforms.
Read more at the Morning News.