“For National Poetry Month I’ve been noticing where poetry showed up in every day life. Recently in the New Yorker, Calvin Trillin wrote about pi day and mentioned:

There is a form of poetry known as a piem, in which pi’s digits are represented by the number of letters in each word. The best-known piem renders the first fifteen digits of pi as “How I want a drink, alcoholic of course, after the heavy chapters involving quantum mechanics.”

Posted by RGBisMe at 5:02 AM No comments:

Gender Stereotypes in the Language of Toy Ads 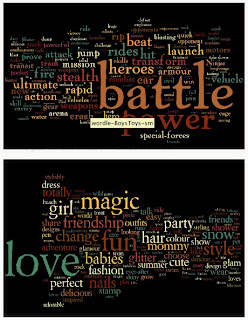 Transcribed boys’ and girls’ toy commercials were made into word-clouds. The difference is stark and immediately visible.

Read more about the project here. 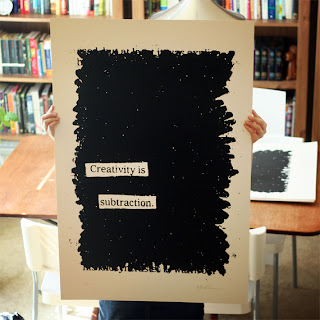 via felt and wire

“Austin Kleon has been creating newspaper blackout poems since 2005, shortly after finishing his undergraduate degree in Interdisciplinary Studies from Miami University in Ohio. He was facing writer’s block, when he got the idea to make a blank canvas out of a newspaper. In an interview with PBS News Hour, Kleon says ‘I looked over at the recycle bin next to my desk and thought, “I don’t have any words, and right over there are millions of them.’”

Asked what he does now when he faces writer’s block, he says, “When I’m blocked, I don’t try to force it. I go do something else. I go for walks. Do dishes. Play the guitar. Watch a movie. Read a book. Doodle. Browse Twitter. As long as you show up every day, you can lose a day and still get work done.”

Though the words in the newspaper may not be his originally, the poems are always a reflection of Kleon. He doesn’t just summarize the initial article in a poem. Rather, he focuses on one or two words that really call out to him, and then he creates new meanings from a few already-existing words or letters.”


See more of his work here.